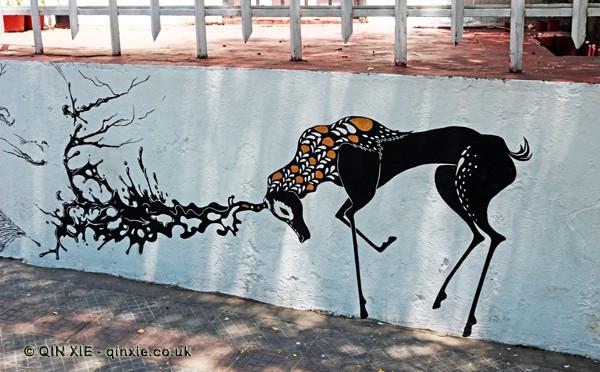 What lured me to Bellavista wasn’t its night life but rather, its street art. Every available space, it seemed, was covered in graffiti.

I heard the Bellavista district of Santiago, Chile, was a hip place to go at night – but it would be rude to call it the Shoreditch or Dalston of Santiago.

Sure, buzzing bars and cheap restaurants added to its Bohemian vibe but the place had a flavour of its own.

At twilight one night, I ventured out to meet Adam Lechmere, a fellow journalist, for drinks and dinner.

We both stayed on in Chile after a wine trip with Errazuriz and Vina Montes, and like all travellers, needed a friendly face after a long day’s work away from home.

Adam stayed in Vitacura, a trendy, upscale part of town known for its commerce. I booked a few nights at a very nice Airbnb apartment in Providencia, another fairly sterile sort of residential area for the affluent. 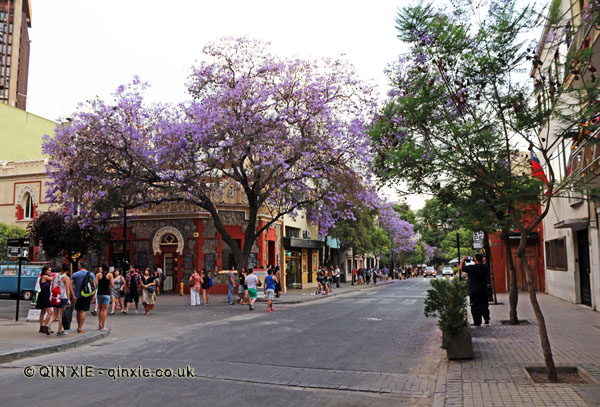 It was the start of summer in Santiago, and the days were searingly hot. By night, temperatures had dropped significantly but it was still pleasant enough for an early evening stroll.

We started in Barrio Lastarria, a smallish neighbourhood with a few hip bars. It was touristy and crowds gathered on the streets, eager to savour the jacaranda blossoms.

Peering in through one of the gatherings, we see a second-hand book stall. New books are expensive in Chile so there’s always a big market for their used counterparts. 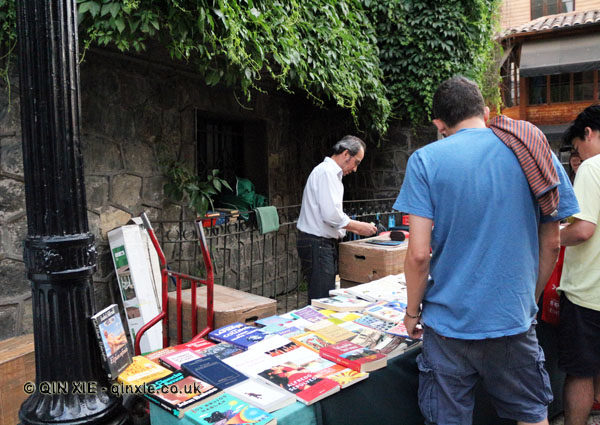 “Do you have anything in English,” Adam asked in much better Spanish than I could muster.

The man at the stall presents a single, well-thumbed volume.

Now we arrive at a serendipitous moment. The book that he offered, of all the books on his stand, was the very book that Adam and I had been discussing earlier on our trip – Death in the Afternoon by Ernest Hemingway*.

So, of course, we had to buy it. Or rather, Adam bought it for me as I had never read it.

Winding our way through Parque Forestal, we somehow arrived in Bellavista.

Stopping at Mar de Pica, a little restaurant that opened just three days earlier, we had a little Peruvian feast. I’d like to say the earth moved for us but it was just an earthquake. The second of my year and of my life.

But in seriousness, the leche de tigre was incredibly good and I would happily drink it as a cocktail.

Afterwards, we stopped at a bar for some drinks before calling an early night.

Here’s the thing – what lured me to Bellavista wasn’t its night life but rather, its street art.

Every available space, it seemed, was covered in graffiti. Not the senseless squiggle found in desolate parts of town but elaborate, colourful murals. Many, I’m sure, were commissioned by the owners of the bars or restaurants. And I love a good graffiti.

So, two days later, armed with my camera, I went out for a shoot.

The subjects were numerous but most depicted people. People eating pizza, people nursing drinks, people having fun. That, and the vibrancy of the colours made the whole neighbourhood quite alive.

Actually, I wanted to pitch it as a photo-led piece but apparently graffiti wasn’t quite upscale enough as a subject so you get to see it here instead in video form:

Hey! You got to the bottom of this post so you must have a curious mind. Why not check out some of my food photographs from the trip?

I went to Borago, one of the best restaurants in Chile. It’s currently featured on the Latin American 50 Best Restaurants List and you can read my review of it over at Matching Food and Wine. I also ate at Restaurante 99, what’s been described to me as a hipster restaurant… 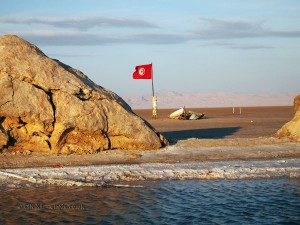 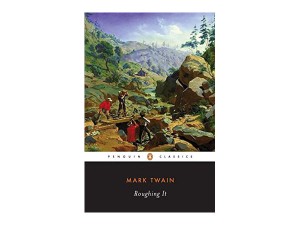 Next post Roughing It by Mark Twain, the ultimate vagabond’s book?