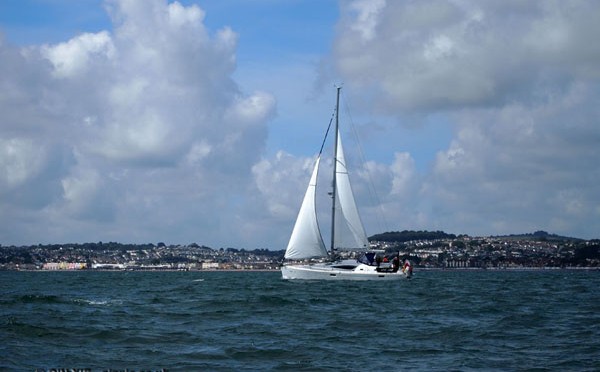 A short while later, we stop in the middle of the bay in a seemingly random spot. The crew promises that there is mackerel to catch.

As part of a visit down to Torquay to do a profile on Simon Hulstone of the Michelin starred Elephant, I attended a “Catch and Cook” event. The event is part of a series of tourism packages designed to promote the Geopark on the English Riviera, as well as helping people to understand more about the Geopark itself. Incidentally a Geopark is a status given to certain areas of the country that have interesting geological heritage. The aim is “to protect geo-diversity and to promote geological heritage to the general public as well as to support sustainable economic development of the area, primarily through the development of geological tourism”.

Some of the packages are all about the caves and caverns in the area while others like this Catch and Cook session was more interested in the food aspects of the Geopark. In particular, Hulstone and staff from the trust focuses on Torbay’s marine environment and sustainable fishing.

The day starts bright and early with a 9am meet at the harbour by the Elephant, where we board a small fishing boat which takes us out to sea. A spot of mackerel fishing is the first thing on the agenda. On this short and rocky journey, Alex from the Geopark organisation talks us through the geology of the area from the rock formation of the bay to the types of sea creatures we might encounter. It’s rather exciting to hear that we might spot some dolphins as well as of course the mackerel we’re hoping to catch.

A short while later, we stop in the middle of the bay in a seemingly random spot. The crew promises that there is mackerel to catch.

We’re each given an angling rod with a weight and three baitless hooks, each with its own fly, attached to the end of a reel of fishing wire. The process is to allow the weight to fall freely to the bottom of the sea and then wind it up six to ten rotations of the reel. Then it’s just a matter of gently lifting and lowering the rod repeatedly until the mackerel catches on. The first mackerel was hooked within five minutes although it was followed successively by curious whitings which had to be thrown back into the sea.

Unfortunately the only things I managed to catch were fellow journalists and one solitary whiting. I even managed to lose my weight and hooks to some unknown creature at the bottom of the bay but alas, I still had no luck with those mackerels. Indeed the boat should have been called “No Mackerel For Qin” instead of “The Boy Richard” as everyone else seems to have caught a mackerel or two.

After trying our luck elsewhere in the bay, we head back to dry land for a spot of fish education and lunch. Tea and coffee are served before we settle down to see Hulstone’s Sous Chef Craig fillet a selection of fish while he talks us through what he might do with the fish. Craig expertly works through flat and round fish including John Dory, turbot, plaice, hake and of course those mackerels.

I got the opportunity to fillet a mackerel too, beginning with cutting off its head and then cutting away the fillets from the spine. Removing the bones from the fillet proved to be a bit of a nightmare though as I sliced right through the skin instead of just through the parts with the bones.

Fish tales over, it’s on to a well deserved lunch – all seafood related. The starter is a salad of warm scallops with pickled carrots while the main entails a fillet of hake with clams, cod cheek, wild mushrooms, pickled shallots, olive oil and parsley sauce. There’s a choice of red or white wine too, with coffee or tea to finish. The only thing missing is something to sooth my sweet tooth. But there’s always some well prepared mackerel fillets to take home. 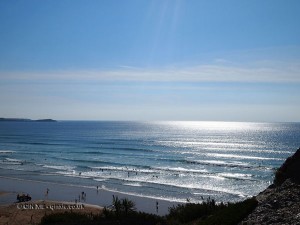 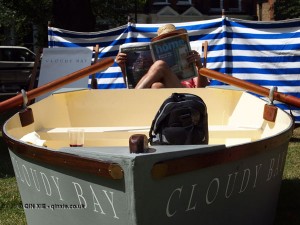